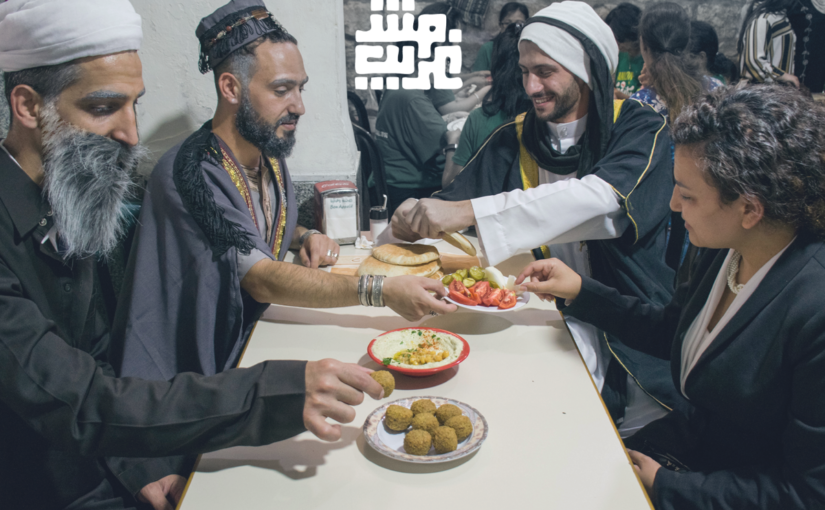 Yesterday was the lunching of “Mish Ghareb” initiative at Herods Gate in the old city, the initiative aimed to represent a group of famous historical figures who influenced the city. A group of young Palestinians from Jerusalem simulated and acted like those figures.

One of the five youth social initiatives implemented by PV in Hirak project which is funded by the EU and in cooperation with the DCA. The initiative aimed to raise the community’s’ awareness about the importance of different historical eras And the influential figures who lived in it, in an innovative way and style that attracts the community of Jerusalem, Herods Gate was the starting point for the narrator who began to speak about the events of a story that gathered the characters from important events in the old city such as Assadieh neighborhood, The last in Bab al-Amoud, where the public rallied and interacted with the characters of the initiative and got to know them in a dialogue and took some pictures.

Seven influential historical figures were chosen to return from ancient civilizations to Jerusalem to tour the Old City’s streets again, to imitate the Jerusalemites with their voices and revive the city’s most important historic landmarks by organizing the “Mish Ghareb” initiative, promoting Palestinian culture and identity in Jerusalem and raising awareness about those historical figures , And the achievements of each during his/her time in the areas of social life, economics as well as architectural sites.

The initiative chose the characters from the historical periods between the Roman and the 20th centuries, starting from the Roman period, Herod presented the initiative and himself, the Byzantine era represented by Queen Helena, through the Umayyad and Mamluk periods, which were embodied by Raja bin Hiywa and the Umayyad dynasty, which centered around Roxlana and Mohammed Al-Khalili, and finally the twentieth century, which represented by Hind al-Husseini.

On the idea of the initiative, Dawood Abu Gharbiya, one of the initiators said: “Under the current situation and in response to all the claims that deny the Palestinians’ right to Jerusalem, it is imperative for us, as a young Jerusalemite, to think of an initiative within Hirak project as a kind of reminder and raise the Palestinians in Jerusalem awareness of historical eras and influential personalities in history Especially that formed part of our history and identity, by passing the knowledge to them and presenting them in an innovative way. ”

“We have chosen a number of personalities representing different historical periods that have passed through Jerusalem based on our research as a group. We have worked on designing a different fashion that reflects the nature of the clothes worn by these personalities in the chosen historical periods. We wore the same cloths as they used to do during these ears. “, he added.

“My position in the initiative was in the Church of the Holy Sepulcher as Queen Helena who build the church. I was very happy with the public’s interaction with the characters in the initiative, and I was pleased with their questions about the characters and their desire to know,” said Rahaf Muslouhi, who acted as Queen Helena in the Byzantine Church of the Holy Sepulcher. ”

It is worth noting that “Mash Gharib” initiative is one of five initiatives that was conducted under Hirak project which focused on empowering youth and building their capacity. The project focused on the initiatives their strategies and forms according to the social, political and economic problems that need to be highlighted in the Jerusalem. Each group involved in the project worked to produce and develop an idea of a community initiative in Jerusalem, based on its ongoing research on community needs. The five groups have recently launched their various initiatives.

The project is implemented by the Palestinian Vision Organization (PV) in cooperation with the Danish Church Aid Foundation (DCA) and funded by the European Union. The project seeks to support change among Jerusalemites by developing community leadership and defending the political, social and economic rights guaranteed by international human rights law.