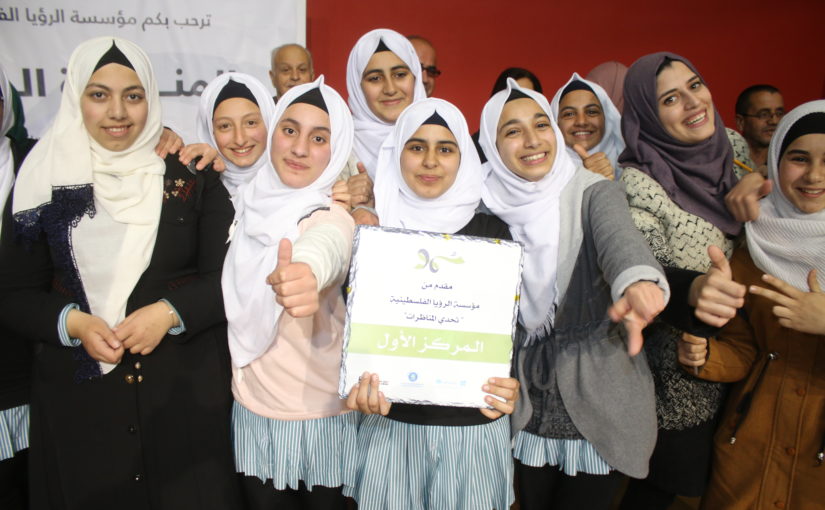 The Palestinian Vision Organization, PalVision has ended the phase debates in schools that was organized within the framework of “Somow” project. “Somow” aims to reject the phenomena of violence and bullying.  PalVision targeted seven different schools, chosen from various Jerusalem and Hebron governorates, each of which was a summit to a series of debates discussing the phenomenon of violence at various levels.

PalVision organized the final debate at a national level, in which four schools from both governorates participated. During which students competed about rejecting violence and discussing its psychological, social, and academic consequences as well as patterns of solutions to reduce it

PalVision organized a ceremony in Hebron under the auspices of the Ministry of Education and with the participation of Palestinian decision-makers and leaders, the participants of the project discussed the first saying, “This Council believes that violence directed at females is based mainly on customs and traditions”.

Two schools from four, AL-Shabat Almuslimat Al Shamela Secondary School from Jerusalem and the Yasser Amr School of Girls from Hebron were qualified for the final phase and contested a final statement. “This council believes that bullying in schools is the main reason for the dropout of students from schools

The Yasser Amr Girls School team was crowned the first winner in the national competition after qualifying through its three stages: School competition, governorate competition and, finally, the final competition with both governorates Jerusalem and Hebron, through statements against the phenomena of violence and bullying in the Palestinian society.

The head of the guidance department at the Directorate of Education in Hebron Fayez Sharaf, stressed the importance of highlighting the issue of violence in schools and its negative social and academic impact as well as the results, including solutions, of these debates that are initially organized by students themselves.

The students of the winning school expressed their joy and sense of achievement at winning first place nationally. They learned in depth about the phenomenon of bullying and violence. They also learned about the mechanisms and ways to limit them. The students confirmed that they are transferring this knowledge and methods to their colleagues in schools to help reduce violence and create positive behavior among students.

As part of the “Somow” project, PalVision, in partnership with UNICEF, involves the implementation of discussion clubs alongside drama and campaign clubs, besides other activities focuses on raising awareness on both phenomenon. As a preliminary stage, the students focused on issues of violence against girls, bullying, child rights, critical thinking, positive dialogue, and life skills. Followed by specified debate skills training, structure of arguments, study and research to gather information, as well as skills to refute arguments, in preparation for the school competition, during which four students representing the target school are chosen in subsequent stages.

The second stage is organized at the governorate level, in which students compete with their counterparts from other schools within the governorate. The judge committee then choose the four best teams from the Jerusalem and Hebron governorates. At this stage, schools have qualified for the third and final stage.

These activities are carried out within the framework of the SOMO-ENPI project in partnership with UNICEF and funded by the Finnish Government to contribute to reducing bullying and violence against girls based on gender. It is worth mentioning that the “Somow ” project enhanced students roles in their communities, provided interactive tools, developed their individual abilities, and helped them to solve problems and reduce the phenomenon of bullying and violence against girls