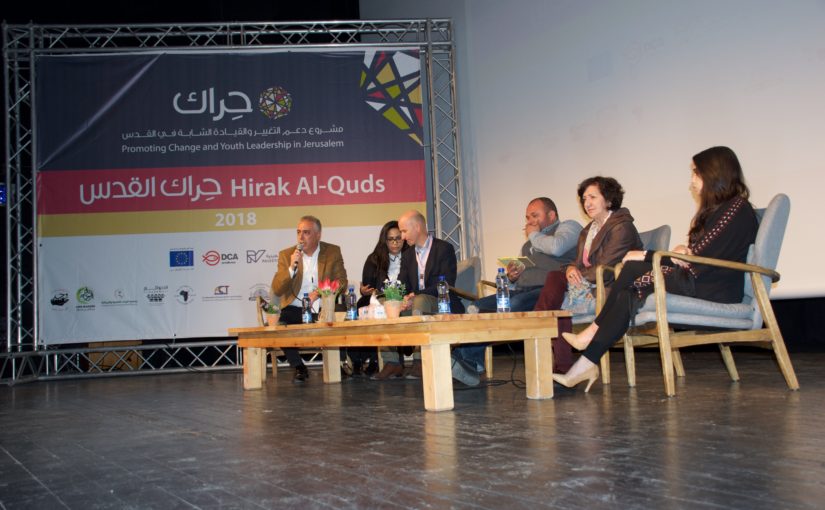 Under the title “Jerusalem Hirak” the Palestinian Vision Organization launched yesterday the activities of the final conference of the “Hirak” project, which was carried out over the last three years, this year the conference chose to highlight the issues and obstacles of the coercive environment faced by the Palestinians in Jerusalem as a result of discriminatory policies imposed on them by Israeli occupation authorities in their social, economic and legal aspects to forcibly transfer them.

number of recommendations emanating from the conference by the efforts of the speakers, participants and the audience who showed their interaction in the dialogue sessions, lawyer Mr.Ibrahim Shaban said that every day we live in Jerusalem is a coercive environment that is forced by the occupation policies that affects freedom of movement, worship and work. He called on an effective movement on the ground and called on the Red Cross to protect the Palestinians in Jerusalem

The Organization presented a series of documentary movies that were produced as part of a Hirak project on coercive environment issues such as the policy of house demolitions, obstacles to movement between Palestinian cities separated by the occupation military barriers, and the lack of health services and employment opportunities that the Israeli occupation authorities provide to Palestinians in Jerusalem towns, especially those separated by the separation Wall.

In the framework of collective punishment as one of the elements and forms of the coercive environment, lawyer Mohamed Alyan stated that the detention of the bodies of victims of extra-judicial killing along with the demolition of houses, revoking residencies and the closure of cities; collective policies must be addressed by individual and collective cases to the courts, Especially since collective punishment is a discriminatory policy in which Israel violates international and Geneva Conventions.

The participants, who went through the youth training program during the year, presented their achievements and initiatives that were designed during the project period and contributed intensive training in critical thinking, scientific and analytical research, and the designing community initiatives. “Mish Ghareb” Initiative, “Joud mn Al-Maoujod” Initiative” Oush “, “Almni Balmak”, “initiative 0.9 km 2” about the cultural challenges in the Old Town, also discussed the most important research studies, scientific publications and position papers that the youth Groups produced during the project.

Each partner organization in “Hirak” project presented the most important achievements, short films and initiatives, and the joint campaign that influenced the Palestinian community in Jerusalem, the aspects of economic life and community awareness. This is part of a series of workshops that were delivered to 20 Palestinian organizations, In the areas of resource development, project management and development, and the defense of the rights of individuals in the Palestinians in Jerusalem.

The Palestinian Vision Organization is implementing a Hirak project which is funded by the European Union and in cooperation with the Danish Church Aid for the third year in two phases. The project aims to empower some 240 young Palestinians in Jerusalem and some 20 institutions and groups in Jerusalem and influencing decision makers and policymakers, side by side creating a space to interact with and press the Palestinian stake holders and international actors to uphold their responsibilities towards Palestinian rights in Jerusalem.